skip to main | skip to sidebar

In a rencontre of this kind, having left my antagonist for dead, I was wise enough to make my retreat into France; and a few days after my arrival at Paris, entering into conversation with some officers on the subject of politics, a dispute arose, in which I lost my temper, and spoke so irreverently of the Grand Monarque, that next morning I was sent to the Bastille, by virtue of a lettre de cachet. There I remained for some months, deprived of all intercourse with rational creatures; a circumstance for which I was not sorry, as I had the more time to project schemes of revenge against the tyrant who confined me, and the wretch who had betrayed my private conversation. But tired, at length, with these fruitless suggestions, I was fain to unbend the severity of my thoughts by a correspondence with some industrious spiders, who had hung my dungeon with their ingenious labours.
“I considered their work with such attention that I soon became an adept in the mystery of weaving, and furnished myself with as many useful observations and reflections on that art, as will compose a very curious treatise, which I intend to bequeath to the Royal Society, for the benefit of our woollen manufacture; and this with a view to perpetuate my own name, rather than befriend my country; for, thank Heaven! I am weaned from all attachments of that kind, and look upon myself as one very little obliged to any society whatsoever. Although I presided with absolute power over this long-legged community, and distributed punishments and rewards to each, according to his deserts, I grew impatient of my situation; and my natural disposition one day prevailing, like a fire which had long been smothered, I wreaked the fury of my indignation upon my innocent subjects, and in a twinkling destroyed the whole race.

Smollett, The Adventures of Peregrine Pickle
Posted by Scott at 2:05 PM 1 comment:

Ah hate cunts like that. Cunts like Begbie. Cunts that are intae basebaw-batting every fucker that's different; pakis, poofs, n what huv ye. Fuckin failures in a country ay failures. It's nae good blamin it oan the English fir colonising us. Ah don't hate the English. They're just wankers. We are colonised by wankers. We can't even pick a decent, vibrant, healthy culture to be colonised by. No. We're ruled by effete arseholes. What does that make us? The lowest of the fuckin low, tha's what, the scum of the earth. The most wretched, servile, miserable, pathetic trash that was ever shat intae creation. Ah don't hate the English. They just git oan wi the shite thuv goat. Ah hate the Scots.

Irvine Welsh, Trainspotting
Posted by Scott at 8:37 PM No comments:

A contingent of howling simopaths swing from chandeliers, balconies and trees, shitting and pissing on passers-by. (A simopath--the technical name of this disorder escapes me--is a citizen convinced he is an ape or other simian. It is a disorder peculiar to the army, and discharge cures it.)

Politics, as a practice, whatever its professions, had always been the systematic organization of hatreds, and Massachusetts politics had been as harsh as the climate. The chief charm of New England was harshness of contrasts and extremes of sensibility --a cold that froze the blood, and a heat that boiled it --so that the pleasure of hating --one's self if no better victim offered --was not its rarest amusement; but the charm was a true and natural child of the soil, not a cultivated weed of the ancients.

The Education of Henry Adams
Posted by Scott at 10:06 AM No comments:

By far and away, my favorite passage from the Bible (and you've just got to read it in the King James' to get the full effect) is from Two Corinthians, where Peter sayeth to Jesus, "Master, how shall I enter the Kingdom of Heaven?" And Jesus sayeth unto him,
The vocabulary and grammar are, granted, a bit antiquated, but I'm always impressed by how it retains its freshness and relevance.
β. Some manuscripts here read: "Jabroni--dost thou smell what the Jesus is cooking?" but this is a minority reading that likely resulted from a margin note of Saint Jerome.
Posted by Scott at 1:12 AM No comments:

Several years ago, philosopher Keith Parsons announced he was retiring from the field of theology, dismissing the area as a "fraud." Edward Feser, a fellow philosopher and a theologian, understandably took offense. Time has passed, tempers have cooled, and Edward Feser, in response to a post from Parsons, politely asked four questions directly related to that post. Parsons response in the combox was:

On second thought, after looking at your "straightforward questions" my answer is: Nah. I was expecting an invitation to a civil academic discussion, but I find that you are still in personal attack mode. My only response will be to assure you that you have not hurt my feelings at all. I think you are a horse's ass, and the disdain of your ilk is of no concern to me at all. Indeed, I consider it a badge of honor. Please do write more nasty things about me for the amusement of your ignorant and boorish followers. It makes my day when I piss off people like you guys.

The back and forth became a bit more heated after that, nearly all the insults flying from Parson's side. I commented:

Party 1: I realize we've gotten off to a bad start, but can we put that aside and have an intelligent and hopefully constructive exchange?

The traditional ad culum allows for several (in principle, infinite) iterations, as:

Party 1: I don't see how I'm being insulting--could you perhaps point out where you think I've been less than polite?

Party 2: I thought I told you to stop insulting me, you horse's ass.

Party 2: (points at Party 1 and then points to picture of horse's ass)

Following the equine-caudal nomenclature, each iteration of the ad culum is typically called a "swish."

Also known as Parsons's Parry, after the philosopher Keith Parsons, who first deployed the fallacy in debate with fellow professor Edward Feser. Three swishes were attested to in that circumstance, but further study has found many instances in the history of philosophy with more. Particularly notable is Schopenhauer's dismissal of Hegel as: 1. a camel's hump; 2. an ox's anus; 3. a goose's gizzard; 4. an auroch's vas deferens; 5. a squid's inkbag; 6. a caribou's nethers; and, finally; 7. a ferret's taint. Equally famous is Russell's exchange with Bergson, the language of which is too crude to repeat here.

And there we have it – the moment of supreme agony on the raft, taken up, transformed, justified by art, turned into a sprung and weighted image, then varnished, framed, glazed, hung in a famous art gallery to illuminate our human condition, fixed, final, always there. Is that what we have? Well, no. People die; rafts rot; and works of art are not exempt. The emotional structure of Géricault’s work, the oscillation between hope and despair, is reinforced by the pigment: the raft contains areas of bright illumination violently contrasted with patches of the deepest darkness. To make the shadow as black as possible, Géricault used quantities of bitumen to give him the shimmeringly gloomy black he sought. Bitumen, however, is chemically unstable, and from the moment Louis XVIII examined the work a slow, irreparable decay of the paint surface was inevitable ‘No sooner do we come into this world,’ said Flaubert, ‘than bits of us start to fall off.’ The masterpiece, once completed, does not stop: it continues in motion, downhill. Our leading expert on Géricault confirms that the painting is ‘now in part a ruin’. And no doubt if they examine the frame they will discover woodworm living there.

Barnes, Julian. A History of the World in 10 1/2 Chapters 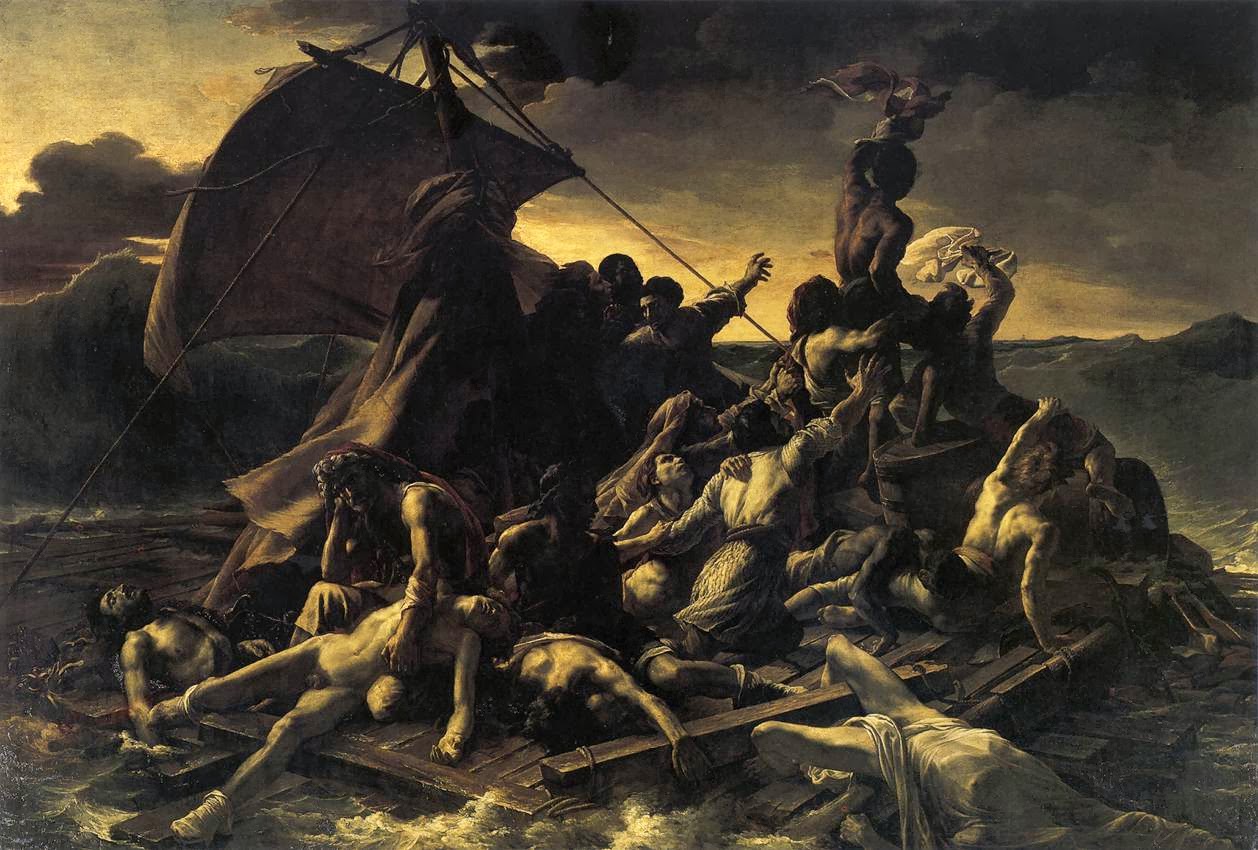